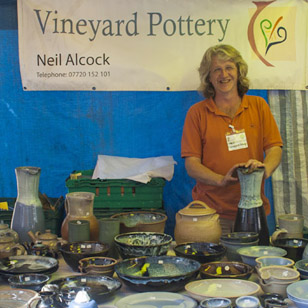 Neil started his career at Eastbourne Art College, where he studied from 1981 to 1985. After leaving college, he worked at Winchcombe Pottery from 1985 to 1993 under the tutorage of Ray Finch. In May 1993 Neil left Winchcombe to travel around Europe and worked near Nice, France, with Oliver Fuchs and then in another pottery in Ghent, Belgium.

Back in the UK, he worked with Russell Collins at the Hook Norton Pottery, Jim Keelrig at the Whichford Pottery, John Huggins at the Ruardean Garden Pottery and John Jelfs at the Cotswold Pottery.

Since August 1998 Neil has worked in his own studio, the Vineyard Pottery, near Winchcombe.

The major influences on his work are English potters and shapes and Japanese potters, shapes and glazes.

The pots are stoneware, fired to 1300 °C, and are all oven, microwave and dishwasher safe. Neil uses three main glazes: tenmoku (black/brown/rust), chun (light blue/grey) and a blue made from his own recipe. Other glazes in different colours can also be made and used.

Neil also works in schools and with groups of brownies, guides and scouts. Neil offers lessons and give talks, demonstrations and workshops away from the studio.