Have you met? Day’s Cottage

With over 200 varieties of apple in their orchards, it’s a busy time of year for Day’s Cottage. Try one of their delicious heritage apples at the market this Saturday and enjoy a taste of British history… 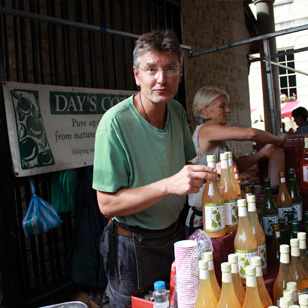 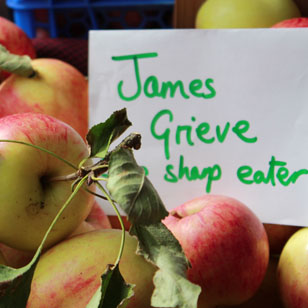 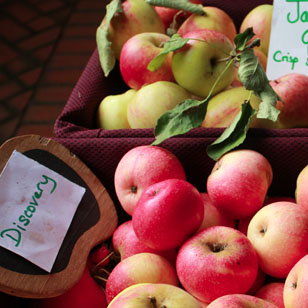 It was formed in 1992 by me, Helen Brent-Smith, and David Kaspar after a bumper harvest the previous year in the orchard by our house. The orchard was planted in 1912 by my great aunt and is based in Brookthorpe, half way between Gloucester and Stroud.

Too many! Well over 200, but our favourites are Adams’ Pearmain, a beautiful, rich flavoured apple, Pitmaston Pineapple, a sweet little yellow apple with an unusual pineapple flavor, and Howgate Wonder, a big sweet cooker with a very long season. Ashmead’s Kernel is our most popular – it’s a russet, bred in Gloucester in 1700 and is full of flavour, crisp and juicy and a great storer.

They are grown totally naturally in traditional orchards that are rich in biodiversity, many of them on 100-year-old trees.

Once they’re lost, they’re lost – extinction is forever! Most modern varieties are bred from a very narrow gene bank which potentially makes them vulnerable to every pest and disease going. Genetic diversity is our safest long-term protection. And we keep finding unusual qualities in old varieties, for example, Taynton Codlin makes a great juice and Cambridge Queening makes the best tarte tatin.

From August to February but longer if it’s been a very good season.

We are there all year round with our juice, cider and perry. This is vital for the preservation of old orchards – it’s not possible to pick all the fruit from huge old trees and much of it can’t be stored, so turning the rest of the crop into juice for sale all year round is the only way we can make this traditional way of growing fruit viable. It’s much better for the environment than commercial growing, but the fruit alone isn’t enough – juice, cider and perry all add together to make the orchards viable, as well as selling fruit trees. This season we’ve also had grapes from our polytunnel, and plums, gages, damsons, pears and quinces.